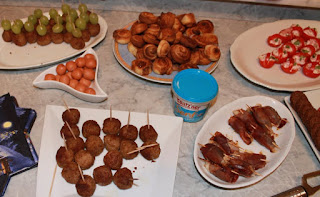 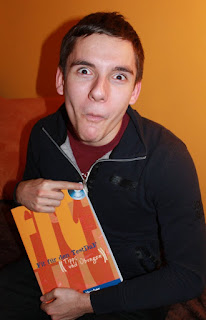 I celebrated New Year with Marga. We went to Heike’s house where there is an interesting collection of family members living under one very large roof. It was Marga’s first visit but she soon settled in.

She got on ‘like a house on fire’ with Heike and her mother. She met brother Jan, and his two sons who also live there, Heike’s son and the family dog and two cats! One brother was missing. And of course, she met Marcel again.

She had bought a book with CDs for preparation to pass an exam allowing access to a German university. Just the thing for he recently failed the entrance exam and needs to work on his German to take the exam again and so start studying in Berlin from October this year. I took a few photos and like this the best!

Heike and her mum had worked hard and prepared a large buffet so that all could just take what they wanted when they wanted. A nice idea and it worked! I sampled a couple of delicious things. One from Russia and one from Sweden. An international array of foods, which represents the openness of the family to people from other countries and cultures.  The photos covers only about a quarter of what was on the table!

I finally got all present to pose for a photograph. That was an interesting experience. So many heads moving at different speeds and directions but I managed to get a couple of shots. Here is one. I had a really pleasant time slipping from one year into the next and hope you did too.