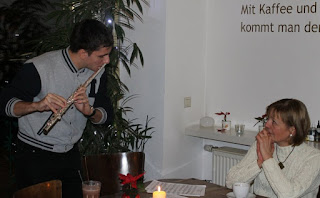 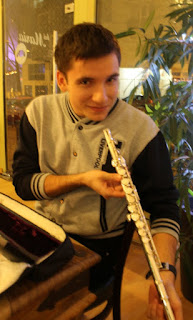 Regular readers of my blog will know that I wrote about Marcel and his flute when he was here in summer. I asked him to bring it on this visit. He agreed.  He carried it in my rucksack on the day out with Marga. Following his attack on the Eisbein, he felt dozy and wanted to sleep, but that was not possible.

Into the S-Bahn to Alexander Platz and change into U-Bahn line 8. Get out at Bernauer Straße. There is now a special exhibition about the Berlin Wall and you can see see and touch part of it – if you wish! I suggest you do when you next visit Berlin.

We went into a small cafe run by a lady called Maria. She is from Poland and Marga recently got to know her. Unfortunately she was not there when we visited. Instead we met a nice assistant from Iraq, who spoke very good German. We had a coffee and after the other guests left I asked if Marcel could play flute. 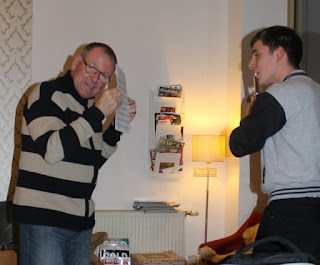 Marcel looked surprised for he said he wanted to play for Marga in the nearby park. I said. “No way, it is too cold!”. The lady agreed, so Marcel unpacked his flute and off we went. It is always a pleasure to watch him play and note how he melts into the notes/music as he plays. 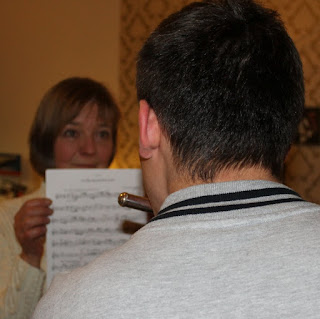 Marga had never seen him play before and was delighted. So was the nice lady in the shop! Here are a few photos of the event. The assistant suggested Marcel should learn the pieces by heart and not read from his music. We agreed. She also said she would tell her boss about his playing and that musicians play in the cafe on a Friday evening. Customers donate cash into a hat to show their appreciation.

Not a bad idea should he start studying at a university in Berlin from next October. A good way to earn a little spending money. He warmed to the idea and said he would learn some pieces by heart. From there we wandered to another bar/cafe Marga knows and had a relaxing chat over a glass of red wine.

Into the U-Bahn and eventually back to my place. Marcel was not tired – I was – and wanted to watch a film I had bought for him. It is in German and called Der Vorleser/The Reader. I thought he would nod off in the first half. He didn’t – but I did! And so to bed and a new day ending with his move to Heike’s house and family.