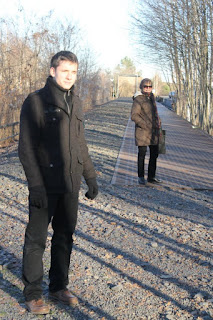 Marcel was over-tired/excited on the evening of his arrival. I have experienced this before so just let him talk and do what he wanted, including eating. He was hungry! And then slowly he relaxed, the first yawn and then slowly steer the conversation towards sleep. 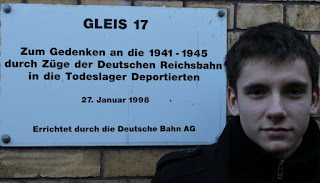 It worked. He slept well and woke mid-morning. He is also lively in a morning and likes to talk a lot over breakfast. It was a special one based on eggs I get from a farmer. He really liked them. Shower, put on warm clothes, and we were ready for the day.

We travelled to the opposite side of Berlin and got out at an S-Bahn station called Grunewald, (Greenwood) which on the way to Potsdam.  Marga was waiting on the platform. She wanted us to see Gleis 17 at the side of the current platform. 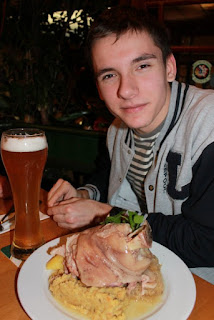 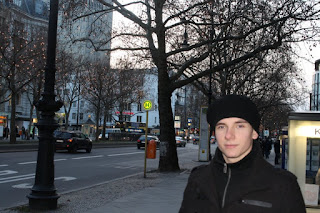 From 1941 to 1945, over 90,000 Jews in Berlin were transported from this station to concentration camps and murdered. It is now a memorial. We noted that a few tourists came in the short time we were there. Marga has Jewish roots so it is always painful for her, but she wanted Marcel to see another side of Berlin. I think all tourists should and not only visit the central area.

From there we walked to the grand villas built by the new industrialists following the creation of German in 1871, and rapid industrialisation from which they became rich. Many were Jews, but their wealth did not save those who remained after the rise of the Nazi Party to power in 1933.

Marcel found it all very interesting and was pleased to see a side of Berlin that most tourists don’t know about. We ended up on the KuDamm not far from where Marga lives. A nice walk along the street and I took a photo of Marcel as it got dark and the lights came on in the trees.

From there we took a side road towards SB-Savignyplatz and stopped at the famous Zilla Restaurant. He was a famous cartoonist at the turn of the last century. He wrote short texts to illustrate his pictures of the working class at that time. The restaurant is famous for simple homemade Berlin meals.

Marcel enjoyed his first Eisbein! As you can see 🙂 Try it when you visit Berlin!