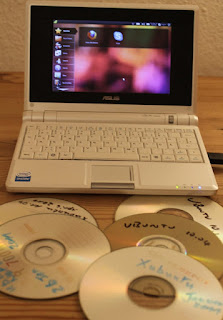 This afternoon Christian arrived to help me. Can I hear the Silsdeners asking who he is? He is Heike’s son and all of 18 years. Same age as his cousin and Marcel. I posted a blog about them when Marcel came to Berlin in the summer. You have not forgotten it for sure!

Christian is something of a computer/IT genius and works for a university on their IT systems. Always good to know such talented people!  I had problems with my Asus Eee Baby Laptop. I won’t bore you with the details beyond I was finally able to instal an old operating system and get the thing back into life. 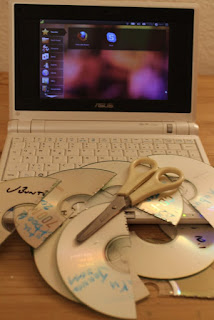 I told Christian about the problems and he arrived with his mother this afternoon to solve them. He had found a new Ubuntu operating system designed for a Baby Asus like mine. I watched in amazement at how quickly he did his work, and even solved unexpected problems during installation.

What I need an hour to do he could do in five minutes. I had heard about the generation problem of such things, but it really was amazing to see a young man react to problems, and know what to do so quickly – and all while I was scratching my head to find a solution.

After getting all up and running, we went through two bags of assorted connections/plugs etc and he told me which had to go to the recycling bin. No surprise that it was about 90%. I have also filled two bags of books to pass onto a teacher to read and then recycle. Slowly I am emptying my cellar!