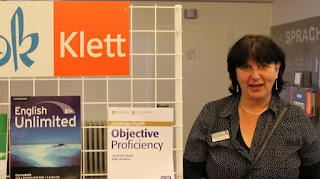 Yesterday I went to Cambridge Day. I can hear people in Silsden asking what that is! Once a year there is a day of lectures/workshops sponsored by Cambridge Examination Board and a number of publishing houses such as Macmillan-Hueber, Klett etc. It is also supported by eltabb, which I co-founded nearly twenty years ago. 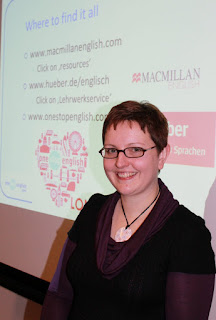 It started at 9.00 am and ended at 4.00 pm. It was very well organised and hosted by GLS, which is a private language school in the north-east of Berlin in a district called Prenzlauer-Berg. There were three periods of worshops composed of three topics/presentations each session. I would have liked to have seen all nine!

I arrived late because of another appointment, but quickly settled into ‘Making sense of Lexis’. I enjoyed the skills of the women who presented the topic. I didn’t learn a lot but it was nice to note I was ‘up-to-date’! In the break I met Mathias, my business partner, and we caught up on essential business matters.

We also went to the same presentation in the final session. This was called, ‘ Teachers’ little helpers’. The presenter was very lively and friendly. Thanks Laura! She is in the photo on the right. It was all about free on-line resources provided by her publishing house.

One of the nice things about such sessions is the amount of information you get, prize draws to win new teaching books, and pens. Yes, pens! I now have enough to keep me going for the next year 🙂  After the end of the sessions, I walked all of ten minutes north and arrived at Stephan’s door. More in my next blog post.