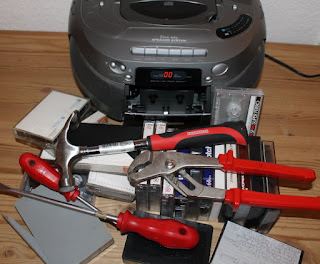 I’ve just had a smashing time!  I decided to recycle a suitcase full of cassettes. A mixture of classical music and heavy metal showing my tastes at uni in the 80’s. I won the suitcase when I was 16 so I decided it was time to let it have a happy retirement 🙂 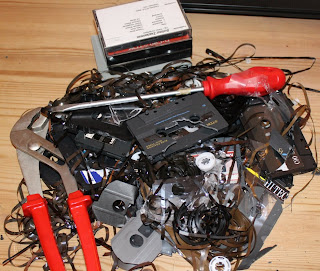 From the cassettes I selected a few with private messages, songs, messages from a special lady during my time in India, and from people in my Bremen period – and – I found a great tape of Kathleen Ferrier songs!

I listened to them and decided which had to go and which I wanted to keep. All went for recycling except four for later listening. Here you can see a photo of pre-smashing and post-smashing. The cassette-radio player, which no longer worked, also went under the hammer. Ouch!

Having enjoyed the smashing, I hope I can now sleep. I have not slept properly since last Tuesday and I am now feeling very tired. I have a busy day tomorrow but plan a lazy day on Sunday. Now where did I put those sleeping pills?