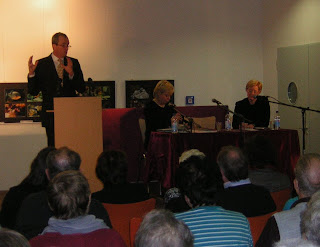 Der Botschafter means Ambassador. Yesterday afternoon I met Sylke and we walked to a communitiy centre in Lichtenberg. This is the area of Berlin in which we live. I live in the southern part of this district called Karlshorst. Why did we go there?

We went to listen to Philip D. Murphy, the US Ambassador to Germany. He was the guest of Frau Dr. Gesine Lötzsch, who is the MP for Lichtenberg in the Bundestag/Federal  Parliament and a member of die Linke Partei. It was part of a series of talks on the theme of ‘Global Politics’, which she and her party are promoting. 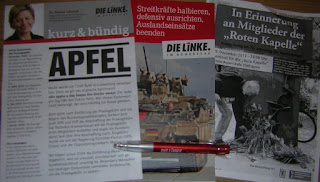 The place was packed, mainly by party members, most of whom were grey haired! Members of the public could ask questions in the second half and I was impressed by the depth and range of issues they raised.

The Ambassador spoke in German and English. The audience was pleased that he only used his translator when the vocabulary was difficult, but I noted that many of them understood when he spoke in English.

Here is a photo of him speaking. In the middle is Dr. Lötzsch and on the right is the professional translator. There is also a pic of a present we all got from die Linke party. The pen was very welcome!