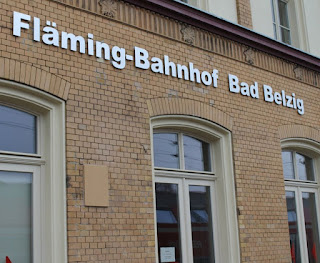 I went to Bad Belzig for the first time yesterday. It is a histoical town south-east of Berlin. The town was allowed to adopt the name ‘Bad’ in 2010 when a thermal bath was completed and opened. This post is written with Frances, Barbara and Shirley in FL. in mind. I hope you enjoy this brief tour into the history of one town in an area called Fleming in the north-east of Germany.

The story begins in the 9th century. There is a record of west-slavic settlements in the area and a defensive work on a hill. From 960AD Germanic settlers moved into the area, with another record of a defensive work on a hill. By 1200AD the area had been taken over by Germanic settlers and in 1230AD the first stone church was built called Marienkirche. 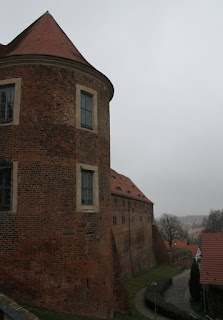 In 1298AD, the area became part of the later kingdom of Saxony. There seems to have been a lot of building and further settlement of the area. The defensive work is then referred to as a Burg = castle and on the same hill overlooking the town. From 1465 it was called Burg Eisenhardt = Castle Ironhard.

In 1530, Martin Luther led a group of protestant vistitors to the town. No record of what he thought about the castle! The town was devastated and the castle destroyed (Not as Ironhard as they thought!) by the Swedish army in the 30 year war in the 1600s. Not a happy time for anyone then for they also had to deal with the Black Death at the same time. If one didn’t get you the other one would 🙁

The castle was rebuilt to the shape/style we can see today, the town was re-settled, fields worked, harvests taken in and so things got better. In 1725 the ‘Postmeilensäule’ was set up on the order of August the Strong, King of Saxony. His name is on it and it shows the distance to other towns in his kingdom.

Now to the photos. The first is of the station, for it was renovated recently, followed by the Postmeilensäule and two photos of the Burg. I shall write another report with more history and photos.