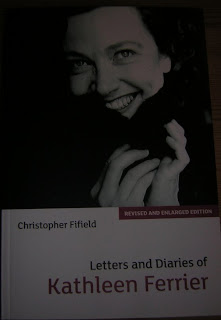 Mr Postie has just delivered something to make my day:-) It is a book containing a collection of letters and diary entries written by Kathleen Ferrier. Can I hear any of you asking who she is? In answer let me quote from the back of the book.

“In 1953, at the age of 41, Kathleen Ferrier, England’s greatest lyric contralto, lost her courageous battle with breast cancer. Her huge appeal to a wide audience has ensured her name endures to this day, despite a career which lasted barely ten years.” 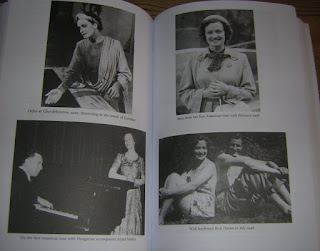 I heard an interview with the compiler of the book on BBC Radio 3 some time ago. I contacted cousin Barbara and she organised the delivery. Many thanks Barbara, I owe you tea at Betty’s next summer!

Kathleen Ferrier is part of my childhood and one of a few happy memories. My mother was musical and encouraged me to play piano. I also sang in the school choir led by the music teacher, Mr Skull. He knew my mother well musically, and politically for both were active in the local Labour Party.

Mr Skull introduced me to Kathleen Ferrier’s voice and I fell in love with her immediately. I still am. The first LP I ever bought many years later was of her singing a collection of English folk songs. Mr Skull also guided me to appreciate the music of Britten, Mahler, Bruckner and Wagner in addition to a wide range of songs and choir music. Thanks Mr Skull. I shall think about you as I read the book.