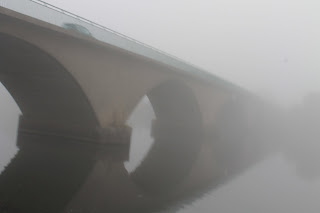 I have just returned for my first visit to Schwedt. Can I hear you asking where it is? You go to the main railway station in Berlin and get into a train that goes there. There is one every two hours so plan your travel.

Nice journey to the north through lots of woods and fields. The train then veers east until the final station. It is Schwedt.

Get out and walk 15  minutes until you reach the old centre. From there you can also walk to a bridge that will take you into Poland. 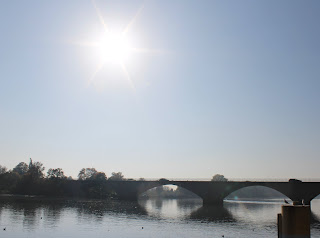 What is Schwedt famous for? It appears to be famous for nothing. It had a palace in which lived some sort of Duke, but that is more than some time ago. Both he and the palace have disappeared.

In the GDR period it was the end station of a pipeline that brought oil/petrol from the then USSR. There is still a large refinery, but the number of workers is much less.

I arrived in the mist fighting against the power of the rising sun. The sun later won, as you can see from comparing my first two photos of the bridge leading to Poland. Another photo is of the Market Square and of the river which forms the border.

It was relaxing to get out of Berlin and enjoy what may be the last of the late summer/autumn days of sun and blue sky. I also had an excellent traditional meal at a local hostelry. Very nice day!