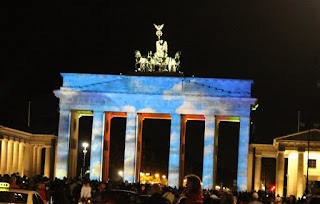 And so we finally arrived at Brandenburg Gate. It must be in the list of top ten tourist places to visit in Europe. There were thousands of people there when we arrived.

Since 1989, the Berlin government has promoted the restoration of the area to its original appearance. It now looks almost like it did in the early 1900’s – given architectural licence 🙂 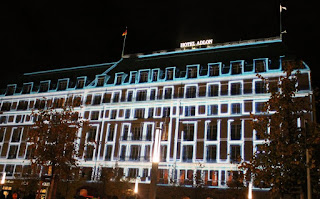 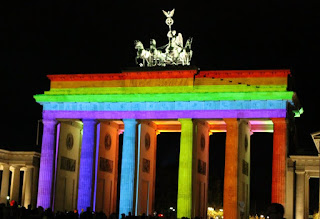 Not far from the Gate is the famous Adlon Hotel. It was famous until 1939, then it disappeared like a lot of central Berlin as a result of bombing raids. I am not sure what was on the site during the GDR. I think it was left empty. The hotel has now been re-built and you can see it lit up in the photograph on the left.

Just around the corner is the British Embassy. It was re-built about the same time. I remember when I worked at the British Council I got an invitation to go to the opening ceremony – by Queen Liz 2. I turned down the offer.

Those of you who know me well should not be surprised. I am totally opposed to monarchy in all its forms and shapes! I went there two weeks later with no pomp and circumstance – and enjoyed my visit.

I returned a number of times until some idiot with a beard, wearing a turban, and shouting Allah threatened to blow it up along with a number of other buildings. Since then security has almost ruled out approaching the building – even the street in front of it is blocked to traffic!

I decided not to even enter the street and stayed with the mass of locals and tourists in front of the Adlon Hotel and Brandenburg Gate. I took some really interesting shots, which due to the lighting made it almost appear to be a different building. What do you thing?