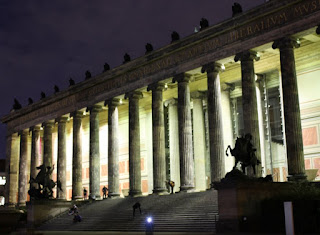 This week there was an event in Berlin called ‘The Festival of Lights’. It has been held for a number of years, and I remember Liebe Andrea sending me photos a couple of years ago.

This time it was Sylke, and not Andrea, who told me about the event. Sylke suggested we meet last Wednesday and go to the city centre to take photographs. About seventy buildings are illuminated with different colours and patterns for a ten day period. 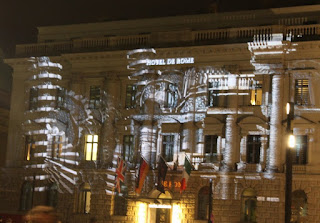 I also saw hundreds of hobby photographers with quality cameras and tripods. I have never seen so many people with tripods before. Sylke had her ‘Rolls-Royce’ equivalent tripod. I came along with my small ‘Trabbi’ equivalent version.

I quickly decided to throw it into the nearest rubbish bin, but Sylke advised me to take it home and offer it to someone else. Anyone want a tripod designed for a dwarf? If so, contact me! Here are a number of photographs taken on route to Brandenburg Gate.

My next post will be only about the photos I took there.