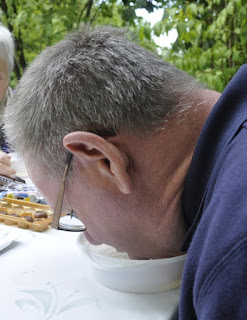 On Friday afternoon I met my Photoshop Gang led by Stefan. It was really nice to see them again, but three were not present for different reasons. Helga is recovering from an operation on her left knee so get well soon Helga! (She is in the bottom left photo) 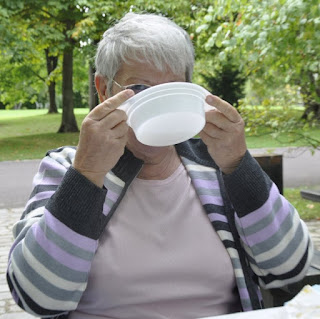 We last met for a ‘photo-shoot’ in Britzer Garten a couple of weeks ago. See my blog for details. I saw some photos taken by Stefan then. I had not seen them before. We all looked at them again and they made us laugh.

Why? I told you in my earlier report that we had a bottle of sekt, but no glasses. We solved the problem by drinking the sekt out of dishes. This made me think of a dog (This will start Marcel smiling!).

In Germany the standard name for a dog is ‘Bello’,  so I imitated Bello drinking out of his dish. This caused lots of laughter  — but then the others began to imitate me:-) See the photos of some nice people acting like teenagers. Why should teenagers have all the fun!