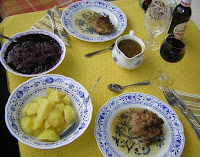 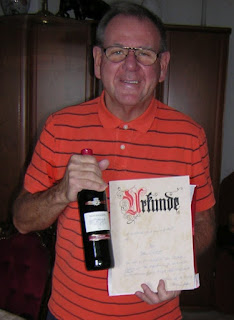 As you can see from the photographs, I and others are still celebrating my new citizenship. Last Sunday I was invited for lunch by one of my ex-‘Wednesday Oldie Computer Gang’. We had ‘False-Rabbit’ 🙂 which was very tasty. 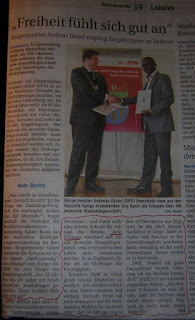 I also got a new ‘Urkunde’ from this friend saying he certified that I would be a very good member of the German nation. He wished me all success in taking this step and added that I would seek to do this with all my strength. The translation from German to English was done by … Me!

A very nice surprise indeed. I also got a tasty bottle of red wine to sip with my ‘False Rabbit’! Mmmh—lecker! This is just one example of the positive responses I have received to news of my new citizenship.

In my earler reports on my Big-Day, I told you that I was interviewed by a journalist when I was in the Town Hall for the ceremony. Her story appeared in the local paper on Wednesday. Here you can see a photo of her report. The photo is of the first ‘new’ German. I was the second to the rostrum, but, half of the text is about me 🙂

Yesterday, when I was talking to another teacher outside a chemist’s, a young woman I know came by on her bicycle to congratulate me on my new citizenship. She said she had read about it in the newspaper. She was not the only one!