I was invited to join two ‘Oldies’ visiting Tempelhof Airport this morning. I packed my bag and camera and off I went. All depends on the weather now it is autumn, so you have to make quick decisions. One of the Oldies sometimes comes to my Friday-Kerstin group. 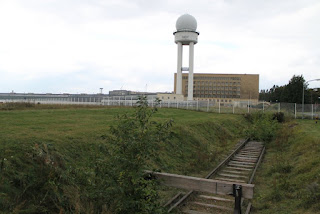 We finally got to the airport and then looked for a way in. It was closed a couple of years ago as Berlin moved from three to one airport. At the moment we have two because of some building/finance scandal at the new one. The police are investigating. Say no more!

We couldn’t find a way in but some nice locals said we had to walk along the perimeter until we found an entrance. We did just that but it almost ‘did in’ the Oldies. One walks with a stick and is waiting for a knee operation, and the other had just had a serious fall and damaged a leg requiring medical care. Not in the best condition for a long walk! 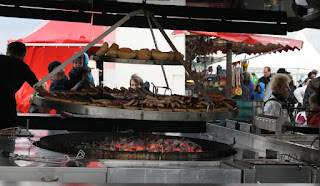 We finally found the entrance and the Oldies decided to settle on a seat in an “Urban Garden” that was being developed out of part of the old airport area. I went on my own to the centre of activity. It was a ‘Balloon-Festival’ being held for the first time. Certainly enough space for it. 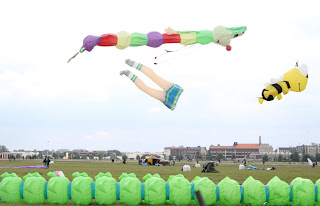 At the centre of activities were lots of mobile shops/restaurants offering a range of wares and all in the name of making a ‘quick buck’ while they had customers. My dear Germans like to eat and drink at any event/occasion and this was not exception. A large choice of eating and drinking – in fact you could spend the whole day there and not see a balloon 🙂

I noted it all and moved to the central area where professionals were guiding large balloons through the air. There were lots of kids who were clearly enjoying it. By chance I met Falk and Elvira from my old Muggelsee Gang. We met exactly a week before and there is a report about that on this blog. It was nice to see them again and we had a good chat.

I took some more photos of the event and slowly returned to the Urban Garden to pick up the injured and tired Oldies. That done, we took a bus to a Markthalle in Kreuzberg, where we found a wide range of meals offered for a very reasonable sum. It is a low income eaters paradise and I didn’t know it existed. I still have to discover many other bits of Berlin.

An easy bus journey took us through the area and back to our part of Berlin. A very interesting and enjoyable day in a part of Berlin I wouldn’t have thought of exploring on my own.