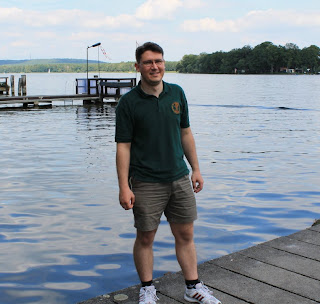 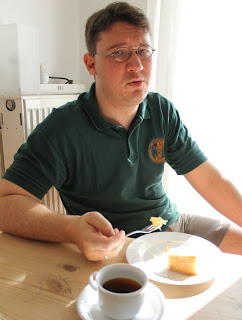 Stefan S. arrived exactly at 10.00 am, as arranged. As he came into my flat I remarked that he was more punctual than the proverbial Preußen! He just smiled!

Stefan is part of Jan’s school ‘gang’ = they all met at primary school. They grew up together and left Grammar School/Gymnasium many years later. They all went on to study at different universities in different subjects. Two are still there writing doctorates. 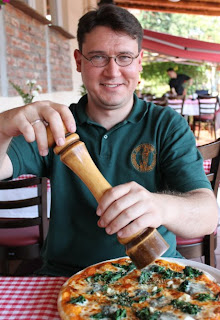 Stefan started then decided it was not for him. He left and is about to start a training programme to prepare him for the job market. Meanwhile, he met this lovely lady and she left to study for her doctorate in Maine in the US of A. He is flying there on Thursday to join her and enjoy a few weeks well deserved holiday. 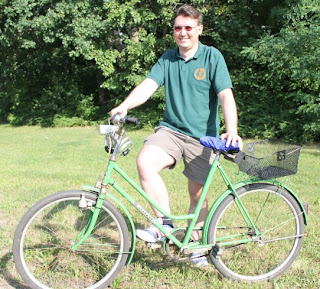 Before leaving he decided to visit his family in Berlin. He then called me to ask if I was interested in a bicycle tour. I said, ‘Of course!’, and so he rang the bell at 10.00 this morning. Stefan now only speaks English with me and I am really surprised at how his English has improved – almost to native speaker level!

We started with coffee and apple cake (see photo) then discussed where to go. We decided on the south east of Berlin. Off we pedalled to S-B Schöneweide (Nice Meadow) to catch an S-Bahn south. We got out at S-B Grünau and hit the pedals again. The weather played along with our day out. No rain, blue sky and clouds alternating with sunshine. 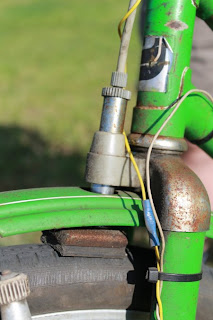 We finally landed in a small town called Schmöckwitz, situated between Zeuthener See, Langer See and Seddinsee (Marcel: we must go there the next time you are in Berlin and the sun shines!) Jan and the ‘Gang’ went around this area last May in kayacks! I was floating around Florida at the time 🙂

By then, we were feeling a litte hungry. I asked a couple of locals for a German restuarant to be told that there wasn’t one! Only Italian, Greek or Chinese – unbelievable! We settled for a local Italian and filled up on calories. A nice photo of Stefan ‘peppering’ his pizza! I ate pasta.

Lots of conversation over the food and catching up on more news before we started the slow, easy cycle tour back to an S-Bahn and then to Berlin. On the way I took a photo of Stefan’s bicycle. A collectors piece! It is a ‘Mifa’ from a factory in the DDR. I had one many years ago.

I was very interested in the braking system of the bike. Stefan explained how it worked and said that this system was called ‘der Kackeschieber’. I smiled and understood why:-)  Back in Karlshorst we parted company as he continued north to join his family, and later drive them to an appointment with friends.

I returned home to reflect on the day. Many thanks Stefen and have a wonderful time with Melanie!