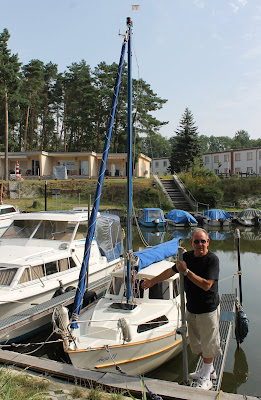 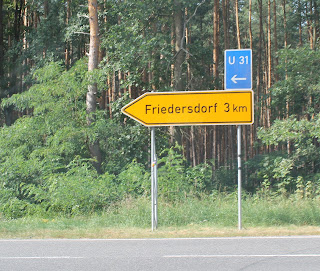 I was going to head this post with the words ‘Hello Sailor’, then remembered I had used them before when I first got  the tiller in my hand! I settled for this less eye-catching title.

I have told you before that Captain Rolf has dropped engine and other parts of his boat onto his foot/hand and ended up in hospital. This time he got it into his head to pick me up and take me to the boat to help him. His wife is now too weak to do that and his sons were at work today, so I came in as first reserve. 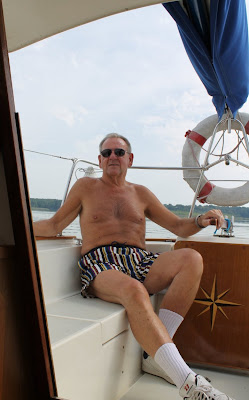 And very happy to help. In exchange he let me take the boat out on the lake and taught me the tricks of steering, how to use the tiller, how to interpret changes in wave patterns, changes in wind gusts and things you would never think about if you were not sitting in a boat with a tiller in your hand. 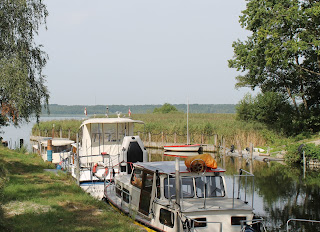 We did the lifting and engine thing fairly quickly so then it was my turn to have fun. Today was either the hottest or second hottest day in Berlin area this year. Nearly 40°C  brought about by winds pushing up from north Africa – or so the weather forecasters told us. It is expected to break this evening and return us to the usual cooler weather.

Rolf let me take the boat out even though there was no wind for the sails. We used the motor and of course I steered. The first photos are of a sign saying we are near the lake. The lake where he keeps his boat is called Wolzigsee (See = lake) and is south of Berlin. I thought there may be wind later but he just smiled in one of those I-know-better-but-I-am-not-saying-anything ways. I just steered and hoped for wind. 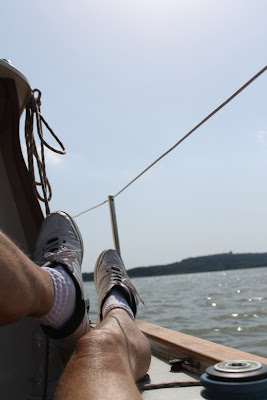 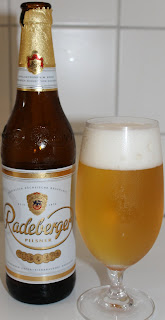 One photo is of the way from the small harbour to the lake. You have to steer through two sets of posts and I did it to ‘Well done’ comments from the captain! There is a photo of me in my new stripey swimming trunks steering the boat.  We stopped in the middle of the lake and waited for the wind…and waited … and waited. It came later as we were about to leave the lake!

While waiting we sunbathed, had lunch and talked about everything and nothing. As the wind slowly gathered I decided to take a photo of my legs. The reason is a comment left by Ian about a photo sent by Shirley and showing me in the sun at her pool.

Ian said it looked like I was trying to get my legs brown. Correct Ian! I think white is giving way to, ‘Get those knees brown!’ This was a famous command from sergeants to new soldiers on arrival at far flung bits of the old British Empire. Ah…those were the days Ian, and the Gin ‘n Tonics were always at least 3 fingers!

Captain Rolf dropped me home just as the first thunder came with showers indicating a cooler day tomorrow. Even so, it was 39°C on my balcony and very humid after a rain shower. The solution was to pour a very cold beer into a glass and sip it.  I did just that. Mmmmmh….the perfect end to a perfect day!