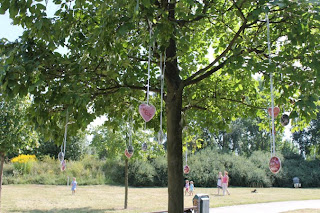 I have just returned from ‘Lyrik Park Marzahn 2012’ and really enjoyed it. I think I can hear Fran and Barbara asking what it is. I called them last night and it was great to hear their voices again. I hope you have BOTH read my blog posts after our talk. They didn’t even know I had taken German citizenship.  I write this blog for them!! 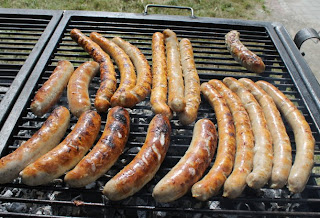 Lyrik Park is a weekend event in the north east district of Berlin called Marzahn. It was the first district I lived in when I moved to Berlin. I have many happy memories of living there and meeting some very interesting people. Top of the list is Jan and Andrea, 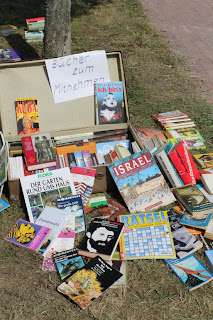 As you know, my German teacher is Frau Fox and she lives near the final station on the S-Bahn line to Ahrensfelde. On the opposite side of her flat is a small park area. That is where Lyrik Park Marzahn took place today, and will continue tomorrow.

She told me about it and invited me to attend today. I got there at 1:00 pm and wandered around. Not a lot of people but some interesting presentations on aspects of ‘lyrik’. A book reading was taking place and piles of books were in the garden to browse and take away. There was an interesting mural around the bark of a tree and hearts hanging from a tree. I had to have a photo of that.

Herr und Frau Fox arrived. It was the first time I had seen her in an electrically powered chair. We chatted and she introduced me to many people. She is well know in the area, and in this association which includes many Russian-Germans. She was a German and Russian teacher in the GDR. 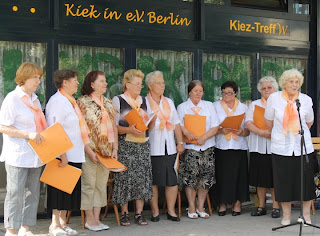 We relaxed with a ‘Bratwurst’ eaten in a toasted roll with Bautsen Senf, and in my case with a small beer. Very tasty, but not to match a freshly baked pork pie from the butcher’s in Skipton! Mmmmmh! Even so, it was a welcome light lunch and took us into the main event of the afternoon.

The main event was a performance by the local German-Russian Choir. I soon discovered that they were all female, including the keyboard player, and of a ‘senior age’. They sang with such feeling and pleasure that it really was uplifting to hear them. They got very well deserved applause for each song. They sang popular folk songs in German, Polish and Russian. 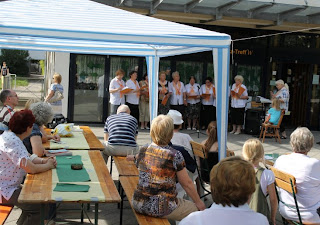 A wonderful start to a weekend forecast to be the hottest this year. I plan a lazy day ‘roasting’ in the garden, after I have skyped Ian and Birgit, followed by falling asleep over a new book.

Monday I shall be on a boat on a lake south of Berlin helping an ‘oldie’ sort out his engine and be rewarded by steering the boat around the lake for an hour or two – and getting my legs brown, of course!

Really looking forward to that. Have a nice, relaxing Sunday and Monday no matter where you are. From Monday the forecast is heading for autumn cool weather. What a pity we have only had three days we can call summer!