Yesterday evening Marga and I said goodbye to Marcel. It was at 18:13 in Berlin Hauptbahnhof Gleis 4.

The train to Budapest was waiting as we arrived and found his sleeping carriage. A very nice railway company lady welcomed him/us and said she would look after him, and that we should not worry. She thought we were his parents!  And so he waved us off. You can see a photo I took just as the train began to move. 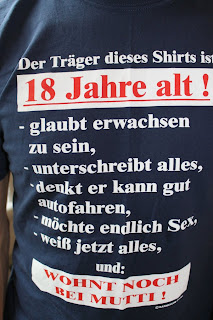 He found the last part of his course more difficult than the first. No surprise there for it was a level higher and the students had to do more learning for themselves rather than be fed by the teacher.

We talked about this as I tried to get him to understand the differences in learning and teaching at different levels. Even so, he did very well and ended Module 2 with 1:7 to add to his 1:0 for his Module 1. Well done Marcel. 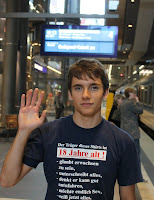 As we moved into his last week he had a lot of things to do for his course, but we found time to meet including celebrating Jerome’s 18 birthday on the 8th. We followed this on the 9th by seeing the new Ridley Scott film at the Sony Centre in Potsdamer Platz.

It was in English, but Marcel said he understood about 65%. It was also in 3D and I can only recommend you see this film as soon as it comes to your nearest cinema. I shall buy the DVD/Blu-Ray to add to my collection. 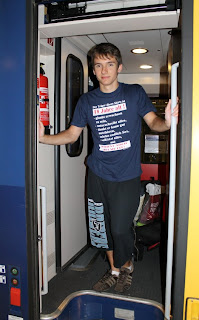 Marcel went to a Farewell Party last Friday so I didn’t see him. He got to bed at 2:00am and was rather tired when he arrived at my place for breakfast on Saturday morning. We also had to move his things from the student home to my place. We celebrated with fish for lunch and a final glass of white wine. Within ten minutes his eyes were closing so I made him rest on my bed. A nice photo of the sleeper here. 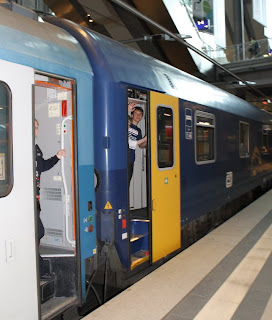 I woke him in time to shower and put on new clothes…and…for him to give me a final flute performance. He is really talented and it was a pleasure to watch and listen to him play. A photo for you to enjoy. A quick gallop to the S-Bahn, then meet Marga at the main station.

After seeing him off, Marga and I went to a cafe/bar and enjoyed a glass of red wine with a portion of tasty food as we chatted. I then left for home to telephone his parents for I knew they were waiting for news. We had a nice long chat in German and was able to assure them that Marcel was okay and the railway lady would keep an eye on him.

As I am writing this he is arriving at Lake Balaton to stay with his grandparents for a weeks holiday. Then back home for an exam and the start of his final term/semester for his Abitur/’A’ Levels/High School Certificate so he can apply for university in September of 2013. It is possible he may study in Berlin. I hope so. Meanwhile, I shall enjoy a holiday with him and his parents at Balaton in July 2013. It has all been agreed!

It will seem strange without him. I had a lot to do today so didn’t have time to think about my loss. I shall of course miss him greatly, but look forward to sharing his adventures via skype before we meet next summer. I am just one of a number of people in Berlin who are grateful to have shared part of summer with him – even if the sun did not shine much!