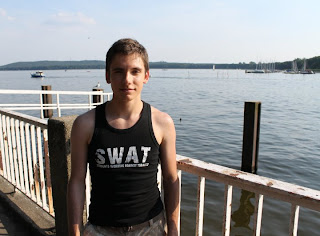 Since Marcel arrived, I have tried repeatedly to show him Berlin’s largest lake. It is called Müggelsee and I have posted more than a couple of stories about my adventures there. Each attempt to show Marcel the lake was foiled by bad weather. 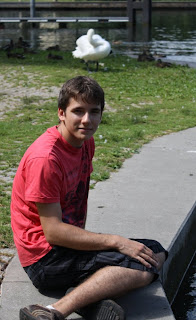 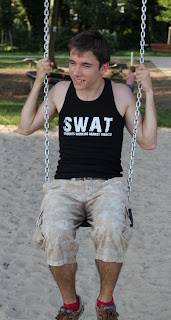 The day after  I became a German citizen the weather continued to be fine and sunny. We hit the S-Bahn then cycled down Bötcherstraße towards the lake. He liked it, particularly the entrance to the tunnel. There you can find lots of beer-gardens and food as you sit near the water and enjoy the views.

Not far away is a playing field for small children. Guess what he did? Yes, he made a straight line for the kids swings and enjoyed five minutes on the swings as the three year olds were trying to work out who this big ‘kid’ was! Here a couple of pics to make you smile.

Yesterday we planned a final bicycle tour to the east. The weather was mixed but we risked it. We took the S-Bahn east to a final station called Erkner. We cycled north through the woods until we arrived at Woltersdorf. It is a popular place to visit in summer for it is on a lake and river system. There are also lots of good restaurants and hotels. 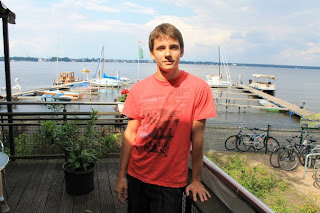 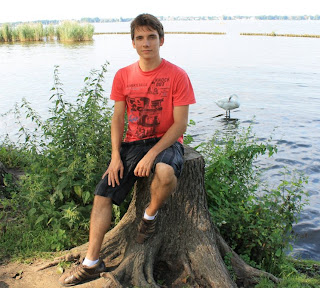 Marcel wasn’t hungry. That was a surprise, but then he had eaten a huge breakfast when he arrived at my place. He loves the eggs I buy from the local farmer and can eat even four at one sitting. Amazing!

Instead of eating lunch there he decided to get to know the local wild life on the lake. This included lots of Donald Duck’s and swans. Here is a good shot of him at ease on the water.

We later cycled through lots of woods until arriving at Müggelsee. We completed a full tour around the lake including a welcome stop for lunch. He was then hungry and happy to stop for a break. I took a few photos of him on the restaurant terrace, where we ate,  then posing at the end of a nearby pier. Just taken to remind him/me of our last visit to Müggelsee together.

On returning home he wanted me to see a Blu-Ray film called, ‘Fight Club’. He had bought it for me. Nice!

We settled down in front of ‘the box’, and I was surprised to note how good the film was, and up-to-date given it was made in 1999. And so ended a very pleasant day.

The last Saturday before he leaves.