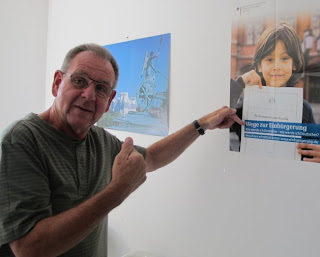 I was born again at a time and place of my choice. Not many can say that. On Tuesday 24 July 2012, at 1:30 pm I acquired German citizenship.  I now a ‘citizen of a republic’ with full voting rights, rather than ‘a servant of the monarch’ with very limited voting rights.  There are pics of me in the office, with my new nationality document,  leaving the building with it, and a present. 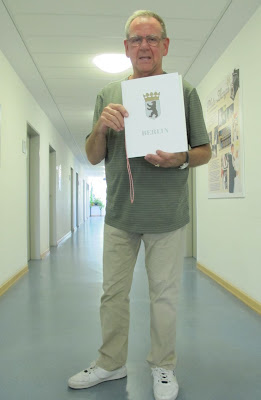 I applied to the relevant office in the borough where I live at the start of January this year. I went with Heike, who I invited. She was interested to see what happens in a ceremony rarely experienced by Germans. I was pleased that she shared the experience.  My ID card is now ready for me to pick up and my German passport will be ready in about another week.

Why did I do this?  The answer begins in the past. As some of you know, I worked in the trade union and socialist movement many years ago. I was on a number of important committees and built up links to the Indian Sub-continent. I also learnt Hindi for two years and passed an examination allowing me to interview people and work there. 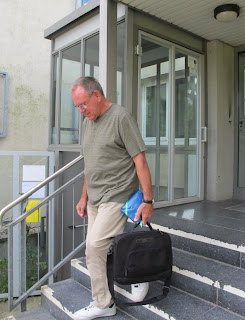 This led to my first working visit-contract to India in 1976. Others followed until I was asked to consider going to university. I did this in September 1979, just as Mrs. Thatcher and her party were elected by the British people. Thus started the  move from a socialist to a neo-liberal politic. A blow for/to me.

During my first degree, I went to India, Pakistan and Afghanistan on projects, which had nothing to do with the university, but which broadened my knowledge and experience.  I used this to good effect to get a First in my BA (Hons.) I did a number of job interviews as I explored the possibility of entering Personnel Management.

A series of rejections followed. In the final one, the Personnel Director stopped the interview to invite me for coffee. He said he could not continue for he had received information after getting my application that I was on two black lists and could never work in Britain again – except in the Labour movement or academia. In view of my background, plus getting the highest level in a first degree, I was considered to be ‘too dangerous’.

I chose academia, returned to India, got my MA and was asked to study for a doctorate. I accepted and returned to north India to do the fieldwork. This was completed and I got my degree,  but discovered an academic career was closed to me. I went to a career advisor and was advised that I should go to college to get a teaching degree in English as a Foreign Language, get experience, then pack my bag and leave the country. I did just that.

I worked for a German school in the UK, as part of my training experience, and so got to know more about Germans and Germany. One Christmas, my sister and brother-in-law gave me a one way flight ticket to Bremen. Two weeks later I was there. I worked on a special language project at the university for two years then planned to move to the British Council in Madrid. 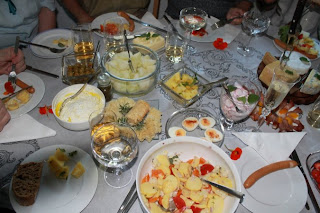 I visited Adrian and Tanja (See one of my next posts) in Berlin. They had just had their first child and suggested I stay and work at the new British Council school in Berlin. I did that, and never got to Madrid. That is still on my list of things to do! And so started a new life in Berlin.

When I retired I had to decide where to. An easy choice. I am nearing the end of my life and so have organised my end. I shall be cremated and my ashes spread in the ‘Socialist Cemetery’, not far from where Birgit is buried. A fitting end. Before then I wanted to finally do something about  being on two banned lists. I decided it was a two way street and I could do the same. I placed Britain on MY banned list and will be happy at any time to inform ‘Her Majesty’s Government’ that since 1979 it has not been mine, and I have taken steps to show my total rejection.

In the evening of 24 July, I went to a party given by Johanna. I have talked about her before on this blog. Lots of nice people including Jutta and Gerald were there. They knew about my nationality change plans. As the evening started I poured champagne into glasses and then informed the gathering that I could now say, “Wir Deutschen…” They were delighted, particularly Jutta and Gerald. You can see that on their faces in the attached photo.  I am very happy to have been ‘Born Again’ and thank all those Germans who accepted and helped me.