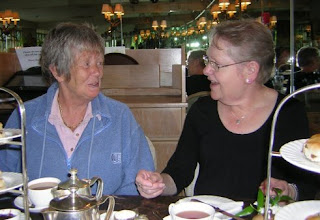 Going to Ilkley is a welcome ritual for me. My mother’s family came from this town, and region, and can trace their ancestry back to the 1200’s. German and Danish family names dominate the family tree, such as Stein (German) and Thorpe (Danish). They were farmers of a large valley north of Ilkley and ended up owning all the land! They lost most of it in the 1950s as the West End Reservoir was created, but that is another story! 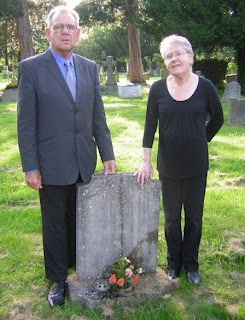 My mother, grandmother, aunts etc always went to Betty’s Tea Rooms on The Grove when they later shopped in the town. It was the place to go to – and to be seen!

Afternoon tea served in the traditional way with silver and china tea service. Of course, they dressed up for the event. I am proud to say that Barbara, Frances and myself have sought to maintain this tradition on each of my visits.

And so we arrived on a Tuesday afternoon to sample the delights of The Grove and Betty’s Tea Shop. It was a very pleasant time and one of the high-spots of my visit. A very tasty Yorkshire Cream Tea was consumed with delight and best manners, not to mention polite conversation!

After we bought flowers and went to the family grave. We left the flowers at the grave, as each thought of their family members there, then had a nice long conversation about many things – but they remain secret 🙂  Here are a few photos to show a very special afternoon.