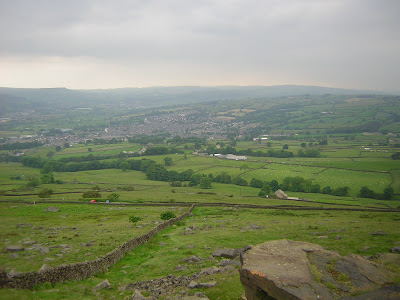 The day after meeting Yosser and Jan, Barry and Pam drove me to Silsden. It is my Heimatstadt – birthplace. If you know anything about me you will know that I effectively escaped from it when I was sixteen. As I have aged, and particularly since I got to know my father again in the few years before he died, I have returned on a regular basis. 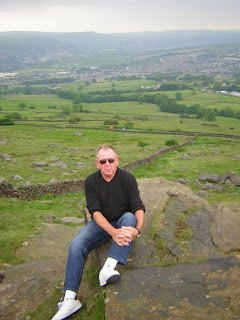 It seems to be successful for I have more hits from readers outside the UK. Most hits per month come from people in Russia. I wonder if I should change the language! The little town of Silsden, now with a population of about 6,000, lies in a valley formed by the River Aire. It is dominated by a hill, officially listed as a mountain because it is just over 1,000 feet high, called Nab End. 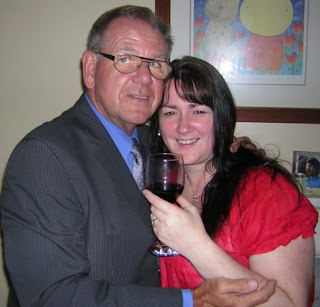 Warren drove me as far as possible then we had to climb the rest of the way. It was the first time in ages since I had climbed to the top. I took a couple of photos to share with you. Can you imagine growing up in this bleak valley and only able to see the rest of the world as far as the hills across the valley? Think about it. No wonder I have wandered – as some in my family say! I still want to see more of the world.

Later that day I went to Keighley (terrible place) then to my bookshop in Skipton (bearable) where I bought books and ate freshly made pork pies 🙂 I ended the day in another little town in the next valley. I called on Adele with a bottle of nice red. She was surpised and happy to see me – and the red as well. She was in a relationship with another nephew. We decided to keep in touch even though that relationship is now history. Thanks for a very nice evenening Adele – and being generous enough to invite my nephew to join us.