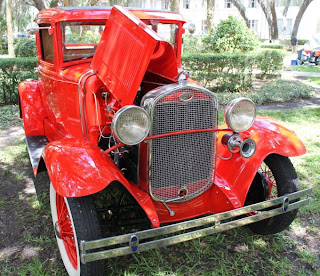 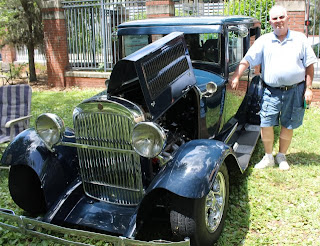 My first day back in St. Augustine started with tiredness and a pain in my back. I had slept badly. Even so I got into the day with an hour in the sun, and pool, before I took the car back to the hire company.

Shirley followed then we went to an ‘Oldie Car’ event. I mentioned this in an earlier post but here are some more photos of old cars kept in pristine condition by their owners. Here are some more.

My favourite was the old red Ford. It looks to be a development of the famous Model-T. There is also a photo of Elvis Presley reclining in a Cadillac. He was visiting us from the moon where he lives with Michael Jackson, according to a few ‘newspapers’ in Europe. Thanks for the visit, Elvis!

I had a long talk with the owner of the black Essex car. Very interesting and I didn’t know about this car before. In fact, the owners of all the cars we talked too were more than happy to tell us about their ‘passion’.   We both enjoyed the event. We had a light tasty lunch of soup in the ‘Spanish Bakery’, which Shirley had told me about before.

We then drove to a park which commemorates the landing of the Spanish. I just had to pose in front of the official images! That evening we went to a concert called ‘Viva Espana’. It was very good. Both singers and dancers got well deserved applause. The perfect end of the day marking my return to St. Augustine.