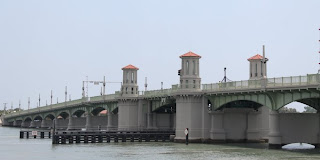 This was a Sunday. We had a nice quiet day. Shirley had invited her daughters, family and some friends to a grill-lunch. It took place on the terrace between the upper storey of the house and the guest room over the garage. I think I was the ‘excuse’ to have the party and I enjoyed every minute. I met people I had heard about but not met. One of them was Judy.

Judy comes from New York but worked as a teacher in St. Augustine for many years. She is now happily retired. She was also very interested to hear about life and events in Germany. She wrote in my Diary about her recent trip to Pensacola, where to go and what to do for I was heading there a few days later.

Her tips were very useful and helped me a lot. Judy later took me on a tour of St. Augustine harbour on a boat tour on my last day there. I did not take any photos of the grill-lunch and guests for I thought it rather rude to do so. Here are a few photos of the harbour I was later to see from a boat.