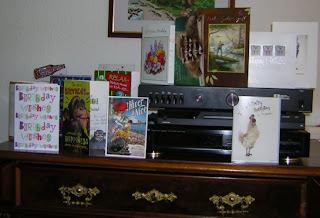 Thanks to all for the birthday cards, e-mails, telephone messages on my AB. Here is a photo of the birthday cards. I enjoyed opening all on my return. I had a really great birthday which ended in a restaurant with Shirley, and a very interesting lady called Modesta. More of her later!

I left the USA on Thursday 24 May to return to Germany. I arrived later than planned at 9:50 am on Friday 25 May. A long time in two planes and different airports with nearly four hours waiting in one of them! Both flights left 45/50 minutes late. The flight there was even worse. 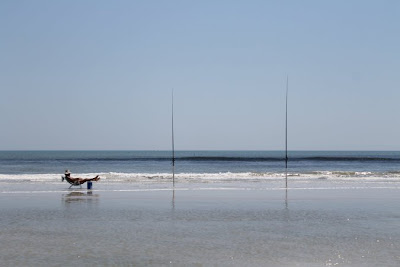 On 2 May,  I left Berlin to fly to Newark New York Airport. We arrived two hours late, then had to vacate the plane to Orlando because of technical problems with the plane. We changed airport terminal and a new plane. I was able to call Shirley to let her know of this ‘mish-mash’ so she would know what was going on. For the future, I decided I would only fly with United Airlines if I had no other choice. You might want to think about this too!

I shall post reports about my wonderful adventure, experiences in Florida over a number of reports, like I did when I came back from Beijing last autumn. Just give me time to work on the photos and write the reports.

I end with a photograph I took on my second day. It is of the beach opposite Shirley’s house. I think it speaks volumes about peace, quiet, rest, sun. sea, sand and all the nice things about a holiday. I think this must be one of the best photographs I have taken. What do you think?