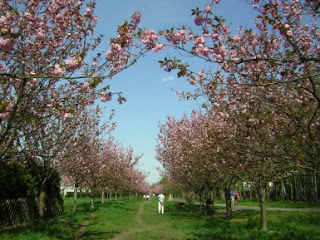 Yesterday I joined a small multi-language/cultural group for a walk. It was in the south-east of Berlin along paths showing where the Berlin Wall was. Because it has lots of information, and well set out tracks and information, it is popular for such groups. Conversation moved between German and English for the non-German walkers could not speak German. I ended up as translator for some. A case of the half-blind leading the blind 🙂 Even so, we all managed to communicate and get what we wanted in cafes. 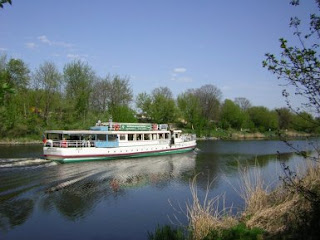 We started at S-Bahn Friedrichsfelde Süd, after introductions and the first coffee break! We followed the tracks starting with a long avenue of cherry blossom trees. This was donated by the Japanese Government in memory of those who died trying to cross the Wall. There are many memorials along the walk.

Teltow Canal forms part of the east-west division. It was dug to link the River Spree to the Havel so that goods could be transported quicker. You can still see barges on the water, but all I saw was a tourist steamer gliding along.

The walk ends in Kleinmachnow, but we continued to S-B Wannsee, near the same named lake. There we relaxed in a large garden full of Berliners eating and drinking – just as we were! It was the hottest day of the year and brought out people to enjoy the blue sky and greenery.

I am shortly taking the tram to Köpenick to join my old Müggelsee Gang for some wine sipping at a Wine Festival there. Looking forward to seeing them again, and it promises to be even hotter than yesterday. Perhaps I’ll drink a cool beer instead!