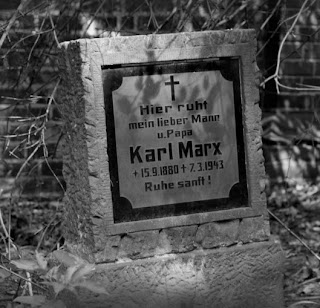 As you know Silke has a blog.  She also has a site for sharing pics with profis. I saw this and liked it. I asked if I could use it on my blog and she gave permission.

As you can read there was (perhaps still is) more than one Karl Marx. I think I can hear the neo-cons wailing, ‘Oh not, not more than one of him!’.

I found this photo interesting for its simple and basic form and statement. Plus, this Karl from Berlin died on 7 March 1943, which is two months and one day before I was born.

He was 62, a Christian (see the cross) married and a father. I wonder what he died of and if any of his children, or grandchildren, live in Berlin.

I also wonder if life was hard for him with such a name during the Nazi period.  Makes you think doesn’t it?