Jan and Arancha drove me to the station to get the train to Amersfoort. After dropping me off, Arancha took Jan to his football match (They lost 🙁 ) then went home to complete some important work without noise and distraction. 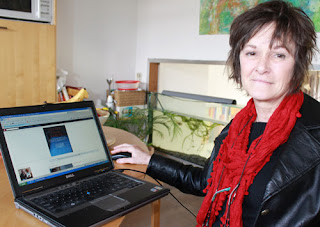 I thought about them as the train took me inland to my next stop. Jeff and Marjan live in Amersfoort. We met nearly thirty years ago when Jeff arrived at the university in Brighton to study for a doctorate. They became part of ‘The Brighton Gang’.

Later they moved to the Netherlands where Marjan comes from. Jeff got a good job in an institute directing funds and projects to the south of Africa and then they started a family. They have two boys. Actually they are now taller than I am and it was great to see them again.

It was important to meet when we did and catch up on latest developments. I brought them up-to-date on what other members of ‘The Brighton Gang’ are doing, and I learnt of a sudden change in their lives.  I had some time with Marjan on the Monday before she took me to the station so I introduced her to my blog.

She was pleased to read it and learn how to steer around to find information about previous posts and people. She agreed that I take a shot of her with this blog showing on her laptop. Thanks Marjan and Jeff and let’s keep more regularly in contact. I had a lot to think about as I settled into my seat on the train back to Berlin. Thanks both and here’s to the next time!