I had another fall yesterday afternoon. I say ‘another’ for if you remember, I had a bad fall early May last year leading to the cancellation of my trip to France, and putting my later UK flight into doubt. 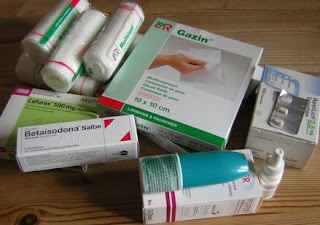 I came from my German lesson, and saw a tram to take me home approaching. I decided to run over the road and jump over a chain blocking a side entrance. I misjudged the height of the chain. It ran down my left leg from knee to ankle – like a knife. A long wound!

It was exactly where I cut myself four weeks earlier. Part of that old wound had hardly healed. I sat in the tram and saw the blood seeping into my sock. It got to my local chemists just as it was closing and bought some medication and bandages. They helped.

This morning I cancelled an appointment and saw my doctor. He dressed the wound and prescribed lots of bandages, lint, salbe and antibiotics. Here you can see my latest collection on the left. On the right is my old medication for allergies and tablets reduce my blood pressure.

The Doc is concerned about infection in the wound. I have already had three operations on this leg and another is likely before the end of  the year. He banned training for at least the next two weeks, but  allowed me to take the train to Den Haag on Friday. Hooray!