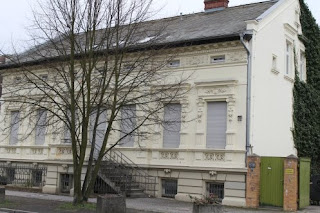 I went to Alt Marzahn this afternoon with Silke. On the way we stopped at the Baumarkt to buy another four carpet squares for the entrance area to my flat. I think I told you we had been there, and I needed more. That was soon done, so we headed to Alt Marzahn for me to play around with settings on my camera and take some pics. 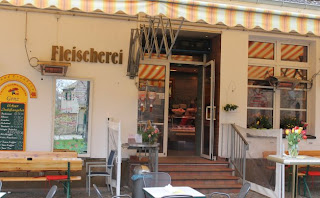 I hadn’t been there for years, and it felt strange being driven into the small old village area. Marzahn is on the north east of Berlin and was selected as the place to build a ‘new town’ in 1977. Other small villages were subsequently swallowed up by modern high-rise buildings, based on the Marzahn model.

I have many connections to Marzahn. It was the first place I lived in when I moved to Berlin. It was the place I met Jan and Andrea, drove my first Trabbi, began to note there is something called ‘Berlinisch’, worked for years at the VHS and got to know Hannelore, the head of languages, who I now visit at her home in the south of France, cheered Jan’s football team every second Sunday, and many, many other memories. Most of them are happy ones. 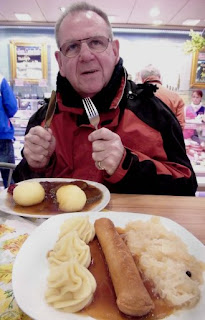 Silka and I started our visit at the local ‘Fleischerei’, where we ordered substantial traditional meals, and at a very reasonable price. Then we wandered into the old main street. It is built around an old church, as you can see in another photo. You can also see the ‘new high rise’ buildings in the background,  which surround the old centre. Next to the church is an old village school. This is now a museum about the history of schools in the area.  It spans three hundred years, and many changes of regime directing changes in educational policy and practice.

Fascinating and a pity it’s not in the travel guides to Berlin. I learnt a lot and plan to return to read even more – but then it is only in German, so that may be why it is not in the tourist guides. Thanks Silke for an interesting afternoon.