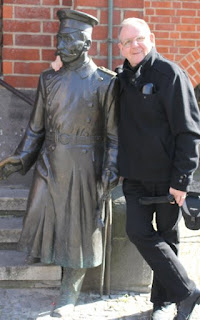 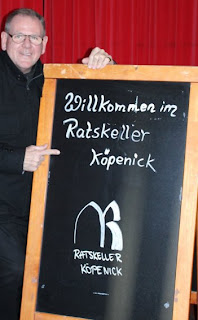 I met Bea for lunch today. It is nearly two years since we last met. Telephone contact and talking of meeting then we just agreed a date two weeks ago.

I took a tram to Rathaus Köpenick and stepped out. There was Bea. She looked great as usual. New glasses and hairstyle and that infectious laugh.

She lives behind Rathaus Köpenick, so didn’t have far to go! She wanted to eat in the Rathaus Ratskeller. So we did!

I must explain for/to non-German speaking readers that a Rathaus is not a house for rats, but a town hall. I think it is called City Hall in the USA. The Ratskeller is not a cellar for rats, but a restaurant in the basement of the town hall. 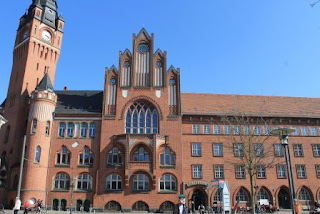 I think the town hall of all major cities has (to have) one. If I remember right it has to do with providing services to the (paying) public, including a place to eat. Nice idea! They have a good reputation for quality traditional food and price.

We settled at a table and ordered our food and drinks. Then I noticed the familiar face of Herr Dr. Gregor Gysi slightly to the left of Bea’s face. He is the very charismatic leader of die Linke Partei in the German Parliament, and often invited to political talk shows on the two main tv stations. He was with a small group, which I took to be family and/or friends. 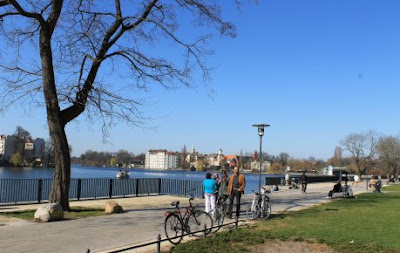 Bea and I covered many topics as we caught up with/on events in each others lives.  We then walked across the road to the River Dahme, which flows into the River Spree not far away, and so together they wander through Berlin on the long way to the North Sea.

Here I took a couple of photos just to capture the bright colours of spring and the people walking along the water, or playing with children, or eating ice-cream, just as people do all over the world when the sun starts to shine after a long winter.

Such a pleaseant time, and as I boarded my tram Bea and I resolved to meet more often, rather than telephone. A good decision!