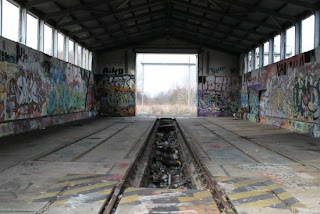 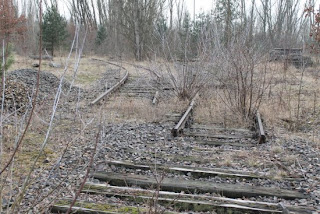 Back to our adventures yesterday. In May 1945, the Soviet Army took over most of Karlshorst. Local families were told to leave their homes and Soviet officers moved in. My flat was on the border of the Soviet area and also occupied by an officer. They stayed in the houses until 1953, then moved to a new military base with barracks and houses south of Karlshorst in the next district.

Even so, they remained in the military area in the east of Karlshorst, centred on the military training buildings and training grounds with railway connection in Beisenhorster Sand. The Officers Mess/Villa where the document was signed to end the war became a museum. The soviet military left the area in 1994, but the museum remains to this day and is well worth a visit the next time you are in Berlin! 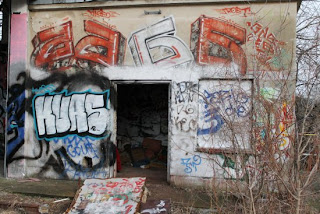 The other buildings are now being converted into family flats for purchase – not for rent! The sandy area behind them is where Silke and I took our photographs. You can see a large machine in my last post. It will be joined by others this summer as the land is cleared to make way for more private houses and a wide road/highway/autobahn where the old railway tracks were.

There is some controversy about this plan for the fauna, flora and animals in the Biesenhorster Sand iare now unique in Berlin. Environmentalists want to protect it and are opposed to the planned development. Perhaps the photos we took yesterday were images of part of Berlin that we shall never see again. 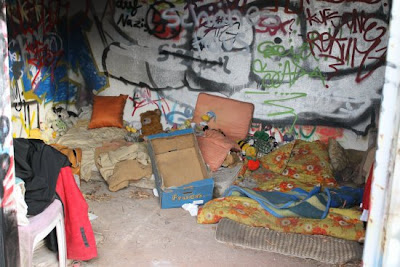 We stumbled across an interesting railway ruin in the very east of the area. You can see that it was previously used to service and check the undercarriage of trains. It is a ‘Rangierbahnhof’ = marshalling yard/railway shunting yard, dating from 1953. It was built early in the soviet occupation period and as you can see from the photos, it had seen better times!

Part of the buildings was a room – perhaps a rest room for workers then – now covered with graffiti, as are all the remaining buildings. This room had a chair, clothes mattresses and a collection of dolls. One of which was a lion with a union jack on its chest. Strange indeed!

We came up with the solution that the room was used by a tramp, but we could not explain why he(she perhaps) collected dolls/puppets. Part of an interesting afternoon discovering the history and mysteries of the Biesenhorster Sand.