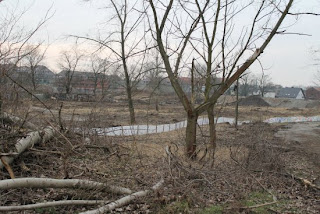 Interesting name! It is an area on the eastern perimeter of the suburb where I live called Karlshorst. This in turn is in the south-east of Berlin and created after 1880. Housing and other developments took place in the centre or west of the district. The east was ‘Biesendorfer Sand’.

It was created in the last ice age = 10,000 years before Karlshorst! (Thanks for the correction, Silke 🙂  It was a large sand area with 10 meter dunes in some places, the kind you can see in many coastal areas. Not the best ground for constructing buildings. But it happened.

As family houses and villas were built in the west, originally near the racecourse to the south, buildings to construct airships were built in the east in 1909. The first airship was the Siemens-Schackert-Luftschiff SSL 1. Construction stopped in 1920 as part of the agreement which ended World War-1. 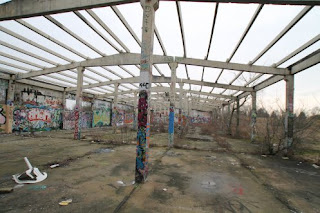 An airport was then built in the east. Sand was dug out of a nearby area called Beisdorf, creating a very large hole. This filled with rain water and is now called Biesdorf Lake.  The sand was taken to ‘fill-in’ parts of the Biesendorfer Sand area and thereby create a flat area suitable for aircraft landing and take-off. The old buildings were then used to service aircraft for the new Friedrichsfelde Airport. Although empty now, they have a preservation order on them because of their architectural value. 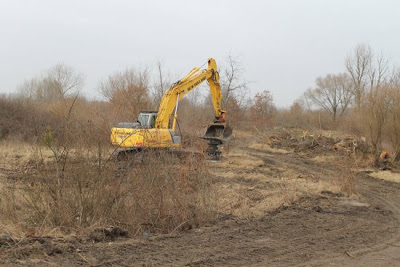 In 1933, a certain party and leader came to political power – you know who! Shortly after, plans were made to build more flats in the west of Karlshorst, one of which I live in, and to build a Wehrmacht Pioneer/Officer  Training Centre in the east. This was dutifully done including an ‘Officers Quarter/Mess’ to the south of the training ground.

It looks like a large villa and became internationally famous when in the evening of 8 May 1945, the agreement was signed there which ended WW-2.  As this training area was being built, so was a railway line just to the east with goods station, water pumps and storage facilities.

That was where Silke and I went yesterday to look around and take some photos. In my case to learn more about using my camera. Here are some photos.