Yesterday evening I went to my first concert of 2012. It was a new concert experience for me. 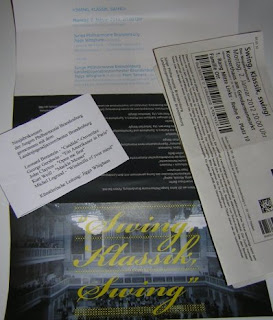 The background is that I helped Ulli and Petra with some paperwork in English. It was for their daughter to get a scholarship to study in the USA for a year. As a thank you they gave me a ticket to join their family in the concert yesterday. Their daughter also plays in the orchestra. Ahaaa…now we have the connection!

It was given by the Junge Philharmonie Brandenburg within which there is a smaller group of young musicians called the Landesjugendjazzorchester Brandenburg. They gave a New Year concert called ‘Swing, Klassik, Swing’.

In the first half the full orchestra took us through some of the ‘Big Band Classics’ from Bernstein and Gershwin. The second half opened with the jazz band in a selection which showed off the talents of key players. That really opened my ears. I was amazed at the energy and abilities of players still in their teens. Later they merged into the full orchestra and a singer took us through more big band classics. An excellent evening.

More please. Their next concert in Berlin is on the 17th October. I shall be there for the programme includes Mahler’s 4th Symphony.