To tidy up in German means aufräumen. What you do is the same no matter what you call it. 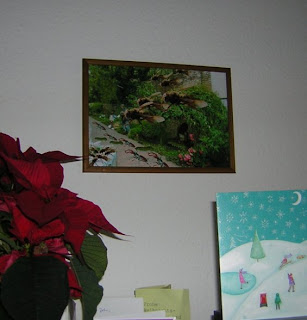 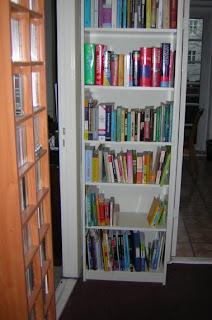 This morning I planned to go to the Training Centre to burn off some calories. I woke with a terrible pain in my lower back. I have had this before, but have no idea why I suddenly had the problem again. I decided not to go for if the trainer noticed I would be in ‘hot water’. You are not allowed to train with a back problem.

I decided to pass the non-training time by ‘Tidying Up’. I started on my bookcase. I ended up with three plastic bags of books which I had not opened in the last year. Mainly books about teacher training. I shall probably re-cycle them. All are in my cellar awaiting my decision. Look at my bookcase now. It hasn’t been so tidy since I moved into the flat. 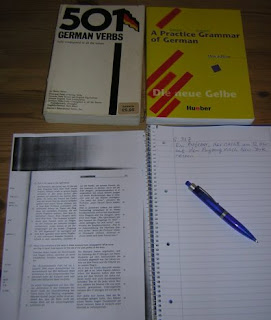 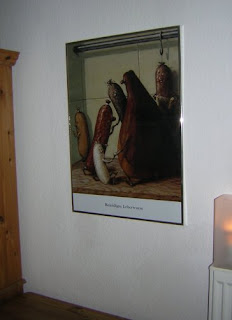 Then I moved onto updating pictures. The first was to find a better frame for my ‘famous’ wasps in the garden picture. You can have it for €3 million  = a snippet. It now graces part of the wall in my living room.

I then removed the calender from my kitchen wall and added a new one. It was a present from Mathias and Sylvana – thanks both! Apparently I was somewhere with them and saw the original and liked it. I had forgotten about this but they hadn’t. It is perfect for a kitchen wall and I notice I start smiling as soon as I enter and see it. It is called the ‘Beleidigte Leberwurst’ and was painted by Ernst Kahl.

Finally I got out my German books and did half my homework. I’ll do the rest tomorrow. Also hope to go training tomorrow if the back is okay. Have you begun the end of year ‘Tidy Up’ yet? It’s a great feeling after you have done it,  so start as soon as possible!