In my last post I showed a child’s toy figure dancing with one of the statues on the River Spree in Berlin. Silke contacted me to give more information. 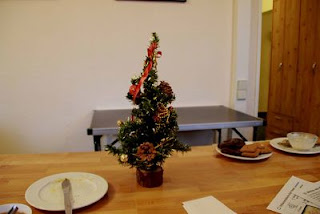 The toy is called ‘Dr. Mabuse’ and is only four years old, so he is not one of her son’s toys. Silke bought him because he is elastic, and you can move his arms and legs.

On the left, you can see a photo of the room/table where we met to practice using the cameras. On the right you can see the same shot in which Silke added Dr. Mabuse. Nice, you would never image that he was not there when the shot was taken!

Don’t believe everything you see in the newspapers!