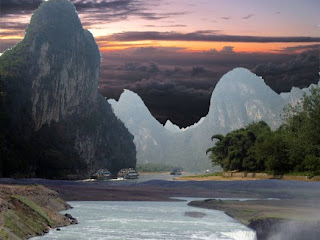 I’ve had a good week and managed to avoid the sneezers and coughers now filling up Berlins public transport system. Marga didn’t. Get well soon! I even had a surprise chat with cousin Barbara over Skype.

The week ended with my Friday Photoshop Gang. After swapping news we hit the computers. Stefan had prepared photographs of the Cote d’ Azur, and of China taken by students from another group over summer. 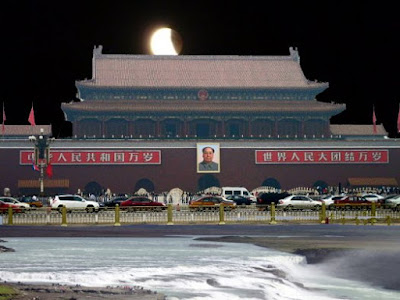 We ended up with interesting mixes of The Cote d’ China. I even managed to create three during the lesson. I don’t usually produce so many. Here are my new contributions to the world of Art 🙂

I wonder what Chairman Mao would think about my adding a waterfall between his picture (above)  and his mausoleum. At least I gave him a nice moon in a perfect black sky!