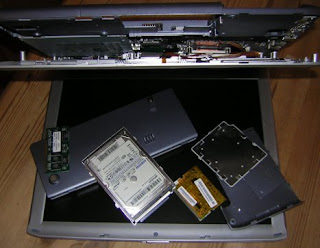 I’ve done it again!   I can hear Sven saying, “No, not another one!” Yes, and I really enjoyed it.

The story begins thus: Once upon a time in a galaxy far away, our hero called John bought a laptop.He did it to learn more about such machines and also make it available to Jan for his studies. But Jan had also bought a laptop, so what to do? 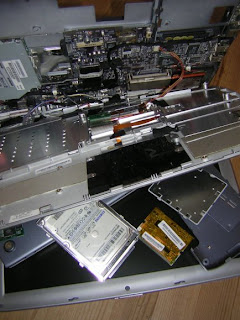 He started to use it for teaching, including at the institute where he worked, and lo….it came to pass that he added a projector and all were very happy to use the equipment so John made a profit on his investment 🙂

One day Daniel arrived in Berlin to learn German and Jan asked John if he could loan said laptop to Daniel. This he did and all were exceedingly happy. One year passed and Daniel returned the machine before he returned to Brazil.

Poor laptop looked well worn and tired but John put it back to work and earned more money. Nice!  Poor laptop got older and slower and could not keep up with pace of technology. Things began to malfunction and this morning poor laptop died. Oh no, I can hear you all cry!

Yes, so John had to remove parts of poor laptop before he hands it to a dealer and makes €30,-. Here are two photos of poor old trusty laptop giving up its valuable bits before being sold off for scrap!