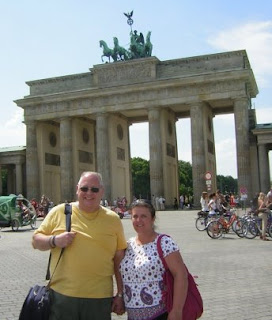 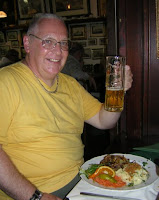 Lee and Gerry arrived in town and we met on 31 May. She is Alan and Lynne’s daughter – and my ‘god-daughter’! She became a professional musician and now plays in a ‘wind band’. 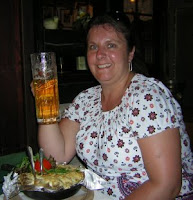 The band was on a tour of 4 German cities. Berlin was the last stop. It was great to see her after so many years. I liked Gerry as soon as we met. A very open personality and he can speak some German!

We met on a warm day which threated rain storms in  the evening.  It was then that I had my accident, but more of that later.

We went through the central tourist area of Berlin, and I took them to a typical Berlin restaurant near to the British Embassy.

We had some really ‘solid food’ which in fact I could not finish. Lee had the same problem, but the food was good – just too much of it.

Here are a few photos of that pleasant evening. Next day I went with them to their concert east of Berlin.