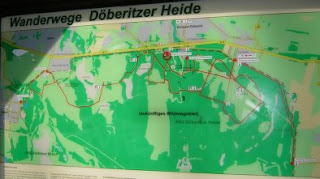 Yesterday I went on a walk in Dallgow-Döberitz. Isn’t it a great ‘double-barrelled’ name. It could also be the name of an illness!

I was one of nine people, mainly oldies, who gathered at a railway station and set off for an adventure.

I really enjoyed the day. Perfect weather for walking – dry, sunny but with a slight cooling wind to make walking bearable. I had never been to this part of Berlin-Brandenberg before. It is just behind Spandau. 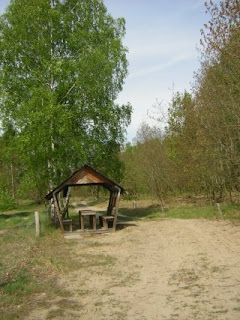 The area is protected, as you can see from one of the photos. You can only walk on a path marked on either side by fences. Another reason is that it was used by the military, so it is believed there are bombs and shells still to be found, removed or exploded.

Even so, it is a beautiful landscape but not original. Apparently, it was covered by oak and other harder trees until the late middle ages. These trees were cut down to provide fuel for houses and local industries. 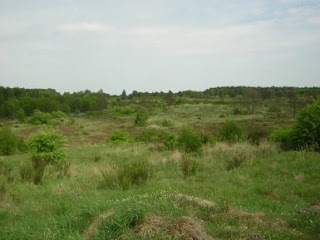 For many years it was a tree-less area. Different small bushes then grew with flowers and grasses which prepared the ground for other kinds of trees to grow.

The things I learn on my walks!

My fellow walkers were really nice and at the end we enjoyed a ‘solid’ meal with good German beer at a restaurant run by the same family since 1860!  Excellent food and service. Now I know why they have kept going for so long!