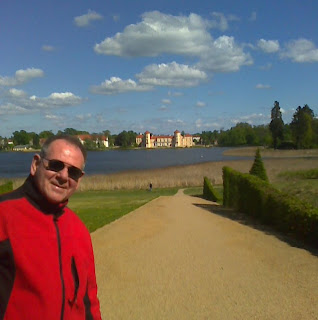 I reported in my start of May report that I finally got to Rheinsberg. What is it, can I hear someone ask?

Rheinsberg is a town in the north  of Brandenburg on a lake south of an area full of lakes. It has a population of about 11,000. It is famous for its Schloss. Around 1720, the land and manor house was bought by the ruling family of Brandenburg. They built a Schloss on the water front and a garden to the south, This was in the direction of Potsdam from where they ruled the province. 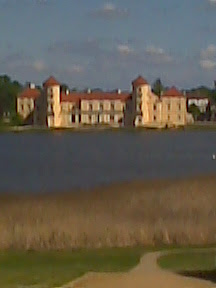 The new Schloss was occupied by a small man later known as Friedrich der Große. He claimed to have spent the happiest years of his life living in Schloss Rheinsberg. Having sampled the area and the Schloss, I think I could happily settle there for the rest of my time. Of course I would need the income to support that lifestyle. Anyone want to finance it?

His father died in 1740, so happy times at Schloss Rheinsberg ended as he moved to Potsdam and Berlin to direct a series of wars that expanded his borders. Next to the Schloss is a theatre. Both are now the sites of music events, particularly in summer, which attract thousands of visitors. I must go to a concert the next time I go to Rheinsberg.

I finally got the photos out of my mobile phone this afternoon, via Marco, a new helper in my Oldie computer course. We had to transfer them to his mobile phone via Bluetooth and then from his phone via cable to my laptop. I’m going to play around with Bluetooth again so I can learn more about it 🙂