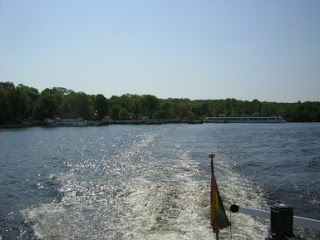 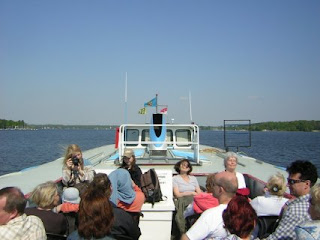 I went to Kladow yesterday. It was my first visit.

An ‘oldie’ from my computer course called and asked if I wanted a join a couple of others who were going there. I replied in the affirmative! Quick packing of water and camera into my rucksack and off I went. 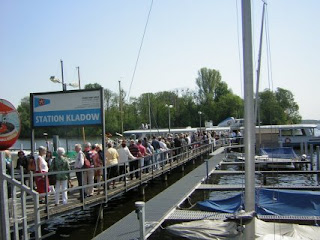 We met at my local S-Bahn and took the train west. We ended up at Wannsee then took the ferry to Kladow. There were hundreds, if not thousands, of ‘oldies’ running about the place. I thought we would never get on the ferrry but we were in the last six to be allowed on.

You can see some photos of the ferry crossing, and the ‘oldies’ everywhere, including the queue to take the ferry back to Wannsee. Kladow is on the way to Potsdam but is part of Berlin.

Such ‘oldie’ events, I have learnt, have a lot to do with eating and drinking, and the trip to Kladow was no exception! As soon as we got off the ferry they wandered into a nearby restaurant. I thought they wanted to go to the toilet but no, they sat down at a table in the garden of the restaurant. 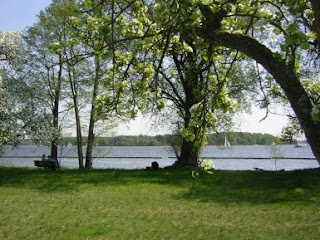 One hour and forty five minutes later they did go to the toilet, after which they decided it was time to do some walking. We set off along a very long walkway along the side of the lake. I took some photos showing the scenes as I wondered why I had never been there before.

After forty minutes slow walk we got to a bench in the shade of a tree and looking out to the lake shore. They sat down – again – and then opened their bags to take out food and drinks. They started eating and drinking – again!

I couldn’t believe it, so decided to go for a walk into the area at the back of the ‘picnic’. I took some nice photos and include one here. It shows a view to the lake with a reflection of the sky in some shallow water. I like this shot. 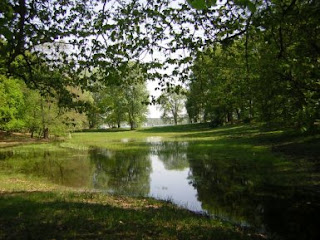 After an hour of picnicking , which included a number of ‘bawdy’ jokes, most of which I understood 🙂 we resumed out walk.  After another hour we arrived at the northerly end of the lake and took a short walk to the top of a small hill.

Guess what was there? Yes, you guessed right. A Gaststätte so they could sit in the garden and enjoy Kaffee und Kuchen.  I sipped coffee as I watched them consume cakes, coffee, ice cream and even brandy. 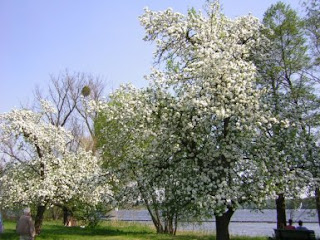 This time they needed over an hour to enjoy it all and continue to talk about everything and nothing. It is good for me to be with such a group for I hear more German than I do in a week on my own. They always try to explain words I don’t understand.

And so we walked all of three minutes to the local bus stop and in four minutes a bus arrived. Like schoolchildren we clambered in and into the top deck at the front for better view. Later we arrived at an  S-Bahn station and headed for our respective homes.

A very interesting day in which I think almost all Berliners were somewhere enjoying the sun by lakes,  rivers and woods – and had perhaps as many food-drink breaks as my ‘oldies’!