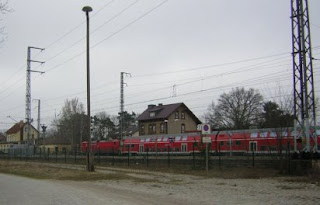 
And so I collapsed into bed after my visitors left and slept for a few hours. We changed the clocks in Germany that night = forward one hour = I lost one hour of sleep just when I needed it!

And so Sunday morning arrived. The morning before I got confirmation that an ‘Oldie’ group would be going on a day trip to Wünsdorf and I was invited to join them. The alarm went off and I staggered out of bed. 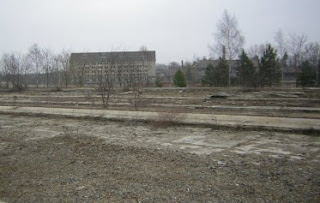 Quick shower, cups of herbal tea and warm clothes prepared me for the journey. I also packed a ‘Flachmann’ full of whiskey, and a ‘Thermos’ flask full of coffee. I knew what was important to share with my  fellow ‘oldies’!

Got the train from my local station and met some of the ‘Oldies’, who were waiting for me. We arrived in Wünsdorf where you can see the (red) train that took me there in the first photo.

We then got lots of information from our guide. The next photo is of what remains of the Soviet Military railway station built next to the public station. The tracks have now been removed with many other things but you can still see where they were. It was an area only Soviet soldiers could enter and no Germans. 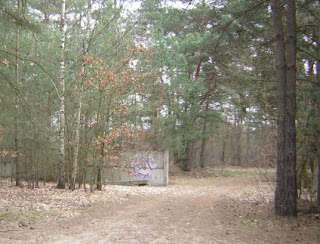 At the back of the photo we can see a large building. This was the bakery for the Soviet soldiers. Very big, but then they had to feed 50,000 soldiers each day.

From 1945, this area was taken over by the Soviet military. They immediately built a wall surrounding the large area. No Germans were allowed into this area.

You can see a photo of one of the entrances now – without the gates and guards.