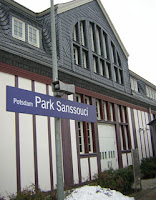 I joined a few other ‘oldies’ on a walk today. I got confirmation that it was going to take place only last Friday. Even so only four turned up. It rained earlier so that must have put a few Sunday walkers off the idea! 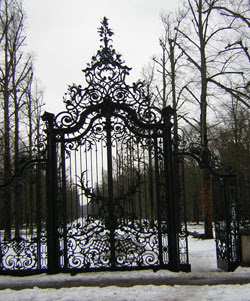 Regional train to Potsdam-Sanssouci station. This was specially built for the last German Kaiser and was called the Kaiserbahnhof. After the end of the monarchy it was Bahnhof Wildpark and now it is Bahnhof Potsdam-Sanssouci. 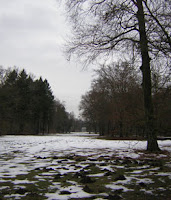 I took a photo of the station sign. Behind it is the Kaiser’s old waiting room. It is now used as a training centre by the Deutsche Bahn.

Our host used to work for the railways, and was born in the area, so I learnt a lot I could not have by just walking, or cycling in the area on my own. I want to take Sarah, then Lee Ann to Potsdam.  Maybe even Andrew and the ‘lads’, in early June, when they are over. Todays walk will help me orientate what is where, when I am with them. 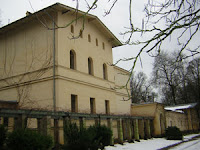 We walked over the road and come to the corner fence of Park Sanssouci. There we found the new-old gates. There are identical ones on the north side of the park.  The gates are a replica of the originals. No one seemed to know where the original ones went. 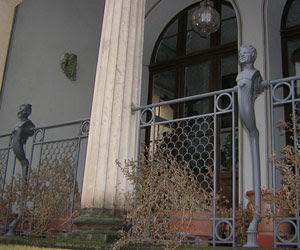 Opposite these gates is a large building in the ‘Prussian-Italalian’ style. The Kaiser had a flair for this fusion of architectural styles apparently. His architect was a Herr Persious and designed all the buildings I photographed today.

I found some interesting statues at the rear of the building. It was originally the post office for the Kaiser when he was in residence in Park Sanssouci. Nice to have a private post office! 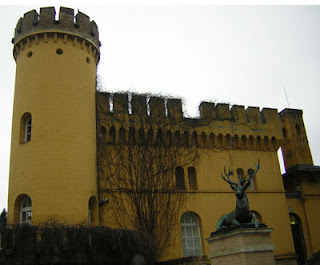 The entry to the Wild-Park takes you past another interesting building. It has battlements in the old fortress style. Strange, someone must have thought it was imposing. It is now a kind of super vets! I also liked the statue outside the entrance. Perhaps the pets brought by their owners like being greeted by the relaxing stag.

And so we set off through the park. The way was not too bad. Melting snow and slush, but we were wearing the right clothes. We stopped for a coffee break under a very large umbrella shaped shelter to which six tracks led. 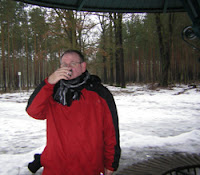 The Kaiser used to wait under the shelter while his gamekeepers hunted deer etc to run across the tracks so he could shoot them – the animals and not the gamekeepers! We just sipped coffee. 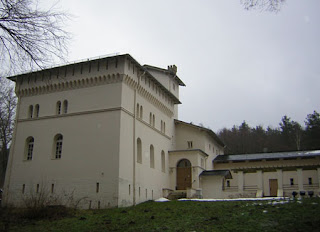 Marching further, we arrived at another building also in the ‘Prussian-Italian’ style. It was built to house the gamekeepers and their families, and is now used as a training centre for potential gamekeepers.  After  walking further we arrived at our destination.

This is the real reason for people to meet and have a walk. It is the restaurant at the end of the walk. Traditional food, and beer, was on the menu of a family run ‘Gaststätte’. Delicious! Lots of talk about the two major topics at any ‘oldie’ meeting. First is health, second is the grandchildren!

A really nice day. I needed to get out of my neighborhood and see other bits of the area. And I learnt  more about my adopted city and its interesting area.