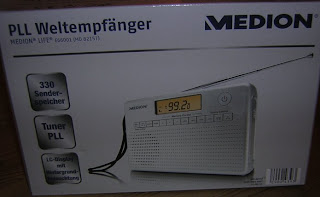 Yes, the BBC wanted to save money. On the 1 December 2010, they stopped broadcasting on the long used FM wavelength and on their website they said “We have moved to FM 94.8.”  Rubbish…all you get is some stupid German station sending out pop songs in English from the 1970s-1980s.

At a Photoshop session in mid-December 2010, Susan asked me if I could get BBC on the radio. I said “No.” She said that everyone she had asked said the same thing. Mmmmh ……what is going on Beeb?

I had to resort to bringing a laptop into the kitchen to go onto the internet and link onto Beeb World Service. And the web page still said it broadcast on FM 94.8 in Berlin. All the people I know in Berlin said the BBC were mad, dreaming, liars, didn’t know what they were talking about etc.

At New Year, I met Milady Teresa who works for Deutsche Welle = a German equivalent to the  BBC. She said she had not been able to get the station since the 1 December 2010. But she had access to ‘Techie People’, and had asked them what was going on. 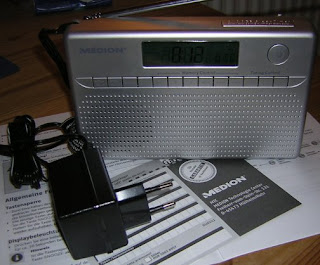 The short answer is that in order to save money, BBC  World Service moved to a cheap wavelength shared with pop music stations, and then broadcast from the 1 December. Of course you can’t hear it for the other stations are more powerful and ‘blast it off’ the wavelength. Teresa told me this happened a lot in the USA and it seemed as if the Beeb were learning cheap-scate methods from the ‘Old Colony’.

I knew that the ‘new’ coalition government in London had stopped funding to the BBC for its World Service programmes/broadcasts, via the Foreign Office grant, as one of its first measures but given the result, they really should have closed it down. No-one listens to it via radio now!

I must be the exception. Yesterday, I bought a Medion Radio Sender at Aldi for €14,90. Why? Because it has a special function of a ‘Fine Tuner’. I played around with it for ages then Bingo! I got the Beeb in Berlin over 94.85 and not the advertised 94.80.

But only in one place in my kitchen, and with lots of interference including Shhhhwwwwwisssshhhhh whenever I move. I can only hear it if I sit still and do not move! Isn’t new technology wonderful? I now wonder if the BBC has gone back to the 1930s to reinvent broadcasting for the future. It seems so!