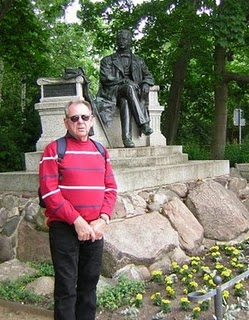 On 20 November in the heading ‘Kirchhofstahnsdorf’ (see below) I wrote that Fontane was one of the famous people buried there.

Stefan of Computer and Photoshop fame, and who is the only follower of my blog (Thanks Stefan:-)) sent me a correction in the ‘Comment’ section which you can find under each post I write. I have left it open so anyone can write a comment. Try it!

Stefan quite rightly said that THE Theodor Fontane from Neuruppin is not buried there. Here are his words. ” Theodor Fontane liegt in Friedhof II der Französisch-Reformierten Gemeinde in der Liesenstraße in Berlin Mitte.”  Correct!

So who is the Fontane in Kirchhofstahnsdorf? It is his second son also called Theodor Fontane. His claim to fame is that he collected, published and promoted his father’s works.

In case you read this and are not German, Theodor Fontane is a very famous writer, particularly for his collections in which he recorded his travels through and around Mark Brandenburg.

Here is a photo of me at the memorial to ‘Papa’ Fontane near the centre of Neuruppin.