I had a lazy breakfast with Neil and called Barbara before packing my bag and leaving Ringmer with many happy memories.

I drove around London and even got through the Dartford Tunnel and found the exit to Cambridge. All as I had remembered it. I approached Cambridge and decided to visit Newmarket first. I have happy memories of this small town with its interesting main street, traditional shops and horse racing tradition. 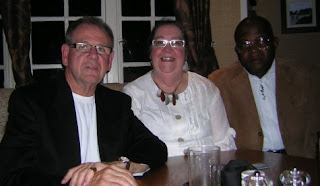 I bought a few things then drove off to Cambridge. I finally found my guest house and discovered that the free wlan to the internet actually worked so caught up on a few messages. I called Pauline and Lew.

Lew answered and was surprised to hear my voice. Pauline was on her way home from work. Although they have retired both work in the local Asda. I don’t think it is just for the money but for having something to do. Pauline was covering for people on holiday and on sick leave.

I told him where I was and that I would like to meet them. I asked him to call me back when Pauline was at  home and tell me where and when to meet. It happened as I requested. I drove to a bar/restaurant at the end of the road where they live. I arrived first and so was able to great them. Long time no see!

We ordered a meal and then settled down to talk. The first thing I told them was to explain an issue that had been between us for a number of years. It resulted from an e-mail from Pauline to the effect that they had sound some silver and crystal objects of mine in the attic and given them to away.

We talked about this and the bad communication. We agreed that communication in future would only be per post of per telephone. We cleared up the matter and enjoyed the rest of the evening.

We talked about their recent cruises to the Caribbean, to celebrate their retirement and the recent one through the Mediterranean. It was interesting that Lew did most of the talking. A sure sign of learning something from his degree!