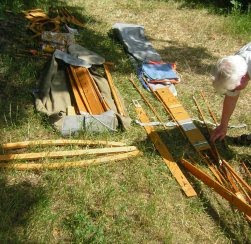 Last Thursday I got a telephone call. “Can you help me John?” said the voice at the other end. It was Harro. He is one of the new ‘Oldies’. He wanted help to set up his boat, actually a canoe, before taking it to his son’s so they could take his grandson out on the water.

“Ja, okay, no problem”, said I. A short time later he picked me up and we drove to Mugglesee. We carried ‘The Canoe’ to the water and so started an interesting puzzle. The canoe is in parts and you have to assemble it. Harro last did this about three years ago, with his son, and now was not sure how he had done it.

We opened the bag and put the parts onto the side of the lake – as you can see. He worked on it for 90 minutes to realise he had put the wrong bits together and would have to start again! I suggested he give up. He agreed.

We packed ‘The Canoe’ back into its bag and drove to an open-air bar area on the side of the lake. There we ate freshly grilled Wurst and drank a cool Berliner Bier. Nice! We talked about football. As you may know, Germany has jus won won 4:1 against England. My forecast was 3:0. I wasn’t  far off!