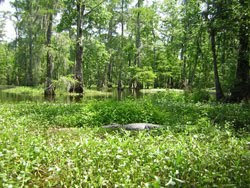 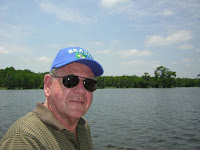 I left ‘Plantation Country’, which stretches from New Orleans to St. Francisville, and drove into ‘Cajun Country.

Its capital is Lafayette and its coastline covers about 80% of Louisiana’s southern coastline. It is really being hit by the underwater oil leak. The first effects were becoming known when I visited the area. 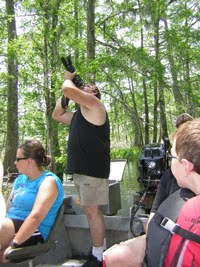 This is the area of the swamp lands where transport is easiest in flat metal boats with outboard motors. There is a big sea-food industry. Correction – there was for I think it has now stopped because of the oil! 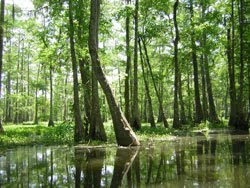 Cajun is a name originating from the French speaking settlers from Canada.  When the English defeated a French army at Quebec, many people decided to leave for the French governed area called Louisiana. I guess they must have travelled by ship for it sure is a long walk!

They settled in the swamp area of West-Louisiana and adopted a sustainable way of life based on hunting, fishing and farming. Much like the native indians they shared the land with! French is still spoken there and many signs are in English and French. 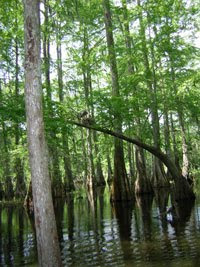 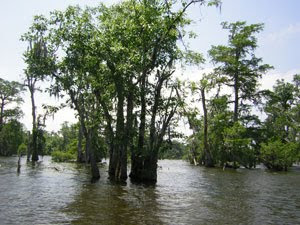 I stayed in Lafayette, which I like, and toured the area. I decided to spend the last day of my 66th year in a flat boat on the swamps so I booked a swamp tour! The weather was pleasant as were my fellow passengers. Our host was called Brian Champage. Great name! He also spoke French – much to the pleasure of a couple from France.

He told us not to dangle our hands in the water – danger of losing a few fingers to crocodiles! – then off we went. I took a few photos, as you can see, and one has a crocodile in the middle of the photo.

I was fascinated by how trees and plants had adapted to life in the water. The trees are waterproof and so were used to make the plantation and other houses we saw earlier!